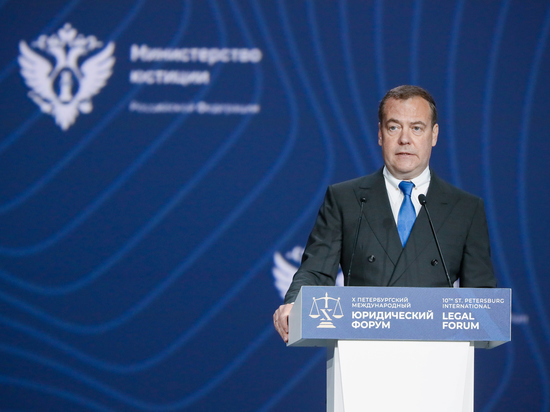 Dmitriy Medvedev spoke in an unexpected capacity: from the Internet, where threatening statements of the deputy head of the Security Council were recently published, he switched into offline mode and participated in the St. Petersburg Legal Forum. It turned out that “live” DAM sounds less aggressive than in the epistolary genre, but it still couldn't do without another “casus belli”. According to the politician, unilateral Western sanctions are an act of aggression and give Russia the right to retaliatory military actions.

Dmitry Medvedev returned to the Legal Forum in a new capacity and with new ideas. But in the end it was possible to recognize the former DAM in him. The Deputy Chairman of the Security Council began his speech at the forum, as in the good old prime ministerial days, with compliments on the changeable weather in St. Petersburg. According to him, it suddenly turned out to be “fantastic”.

“It's a pity that we are all sitting in the hall, and not on the shore of the Gulf of Finland, although it is not far away,” Medvedev joked or complained. He expressed hope that the long-missing face-to-face format would contribute to the effective work of the forum and allow its participants to better understand each other.

Although both presidents who ruled Russia in the 21st century are trained lawyers, only Dmitry Medvedev always showed interest in the specialized forum. While Vladimir Putin has made SPIEF the main platform, which, as you know, is dominated by topics that are more interesting to him – the economy and foreign policy.

However, this year, HDP recorded a lengthy appeal to lawyers, who explained that their role has grown significantly: all urgent problems of the global agenda are directly related to international law. This institution is now in crisis, according to the president, and there are proposals from various quarters to abolish the very concept of international law.

“But don't confuse cause and effect,” said the head of state, “Crisis is not born because of vices that are allegedly inherent in the law. It is an attempt to replace law with dictates and international norms with the national jurisdiction of individual states or groups of states. And the United States is primarily to blame.

Dmitriy Medvedev developed this idea and noted that some international organizations, including some bodies of the UN, the OSCE and the Council of Europe, allow themselves to be used “in the political interest of individual countries”, “forgetting the key provisions of the statutory documents.” For example, the UN Human Rights Council, in his opinion, has lost its “original functions” and undermined its credibility by trying to punish Russia for its sovereign domestic and foreign policies.

“For us, this body no longer exists,” retorted DAM, noting that Moscow treats the Council of Europe similarly, which the Russian Federation once “thoughtlessly joined.”

“What will they do without us? I don't know,” Medvedev shrugged, saying that despite everything, Russia remains the largest European country. And to discuss with her the new configuration of the security system in Europe, you will have to look for another platform. He also criticized attempts by international organizations to organize a tribunal to investigate Russian actions in Ukraine.

“This is simply nonsense! Do they really believe in the possibility of a court case against the country with the greatest nuclear potential?” exclaimed Medvedev passionately.

However, the “live” Vice-President of the Security Council proved to be much less aggressive than in his written statements. No direct insults and threats addressed to anyone came from his mouth on the forum. And earlier attacks on specific countries and politicians appeared to be offset by more moderate rhetoric. Medvedev said about the blockade of Kaliningrad that he is not ready to legally assess the actions of the EU and Lithuania, and that Russia's reaction, if the situation is not resolved, will be economic.

Let us recall that on social networks DAM expressed himself on this topic with the words: “some regular moron”, “we will be afraid of every rustle at the door”, “we have a good memory”, etc.

< p>However, this matter did not go without another reminder of the Russian right of asymmetric response and the “Casus Belli”. According to the deputy chairman of the Security Council, the reason for the “declaration of war” is the sanctions policy of the West. “Under certain circumstances, such hostile measures can be qualified as an act of international aggression. In response to them, the state has the right to individual and collective self-defense,” he emphasized.

According to Medvedev, the restriction regime is aimed at segregating people along ethnic lines, and the main task of the sanctions is to “punish the Russian people.” At the same time, the Deputy Chairman of the Security Council called on the West to “repent of its own stupidity” and “drop the malicious practice” of discriminatory attitudes towards everything Russian.